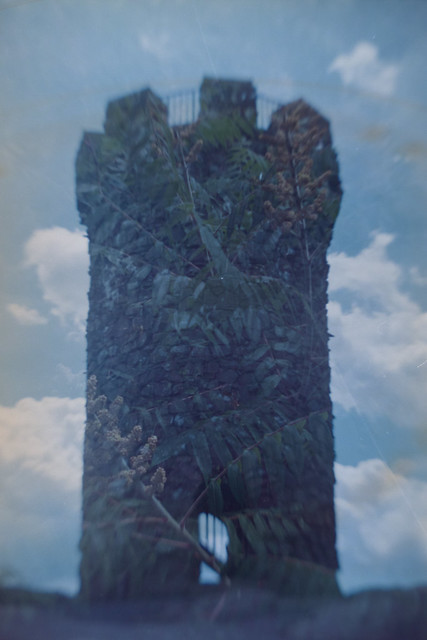 Hikers and park visitors passed the tiny parking area as he slipped on the shoes. The castle at the peak of the mountain was a popular tourist destination, but he hoped that the blazed trail would promise solitude. He removed his backpack in the car seat, and opened every zip. Tightly packed inside was a 35mm Fisheye point-and-shoot camera, a 35mm twin-lens reflex camera, a 120 film Diana F+ camera, an orange filter, six canisters of color 35mm film, and three rolls of black and white 120 film. He knew that, of the various survival and hiking accoutrements, only the GPS in his phone would be used. He had enough trail mix for a week, and enough water for a day.

After loading each of the cameras, he closed up the bag and threw it on. He pulled on the straps so that the bag rode up on his shoulders, and turned toward the entrance.  “The white trail,” he said, staring at the faded map behind fogged plastic on a board marking the trail entrance.  He avoided the scrutinizing looks of two passing elderly hikers.  Perhaps it was because he was thinking aloud, or perhaps his pack was too much.

He fumbled with one of the side pouches, and extracted a tiny mp3 player. He clicked the well-worn buttons with determination, deciding what audiobook would best compliment the hike.  Finally, he pressed “play” and slid the device into his pocket. Deep, melodic narration filled his world as he pressed the tiny buds into his ears; The Complete Short Stories of Ernest Hemingway.  Walking a blazed trail was incomparable to bullfighting or hunting large game on safari, but he was determined to make the solo journey his private adventure. 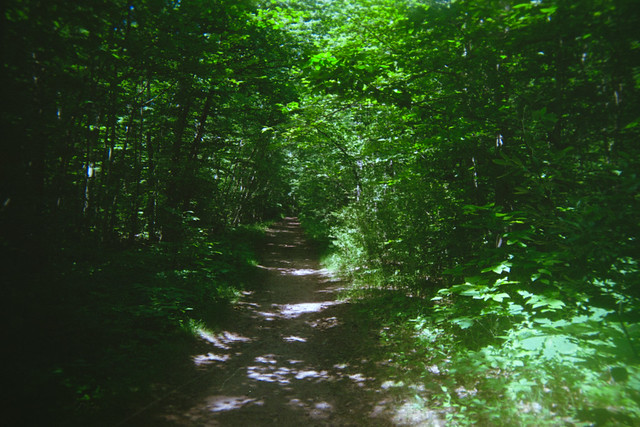 The compass rattled as the watch band bounced on the backpack’s strap.  The second-hand audibly ticked in time with his steps. Sunlight pierced the trees like needles in a pincushion. The trail showed signs that it was once paved, but time and flora had reclaimed the asphalt. The sounds of the freeway to the right could just barely be heard over the narration in his ears. He smiled at an old man walking his dog, who nodded uncomfortably as he passed by.  This trail is far from wilderness, he thought.  Disappointment flashed briefly across his face.  These woods are as treacherous as a theme park.

Light glinted off a small stream of water running parallel to the broken pavement.  Worn grass told a story of people casting aside the blazed, paved trail; adventure doesn’t come to those who stay on the path.  He bent down beside the trickling brook and pulled out the twin-lens camera from his bag, careful not to drop the bag’s contents into the murky water.  The shutter clicked.  Nothing would come out on the film, he knew.  The brook was too far off the path, too shaded by the trees.  Even still, he hoped something could be salvaged.  He stuck the Fisheye camera deep into the short drain pipe that served as a bridge.  Flash! Would that one come out?  He pictured the developed roll in his mind, and saw only a dark, curved smear on amber plastic. 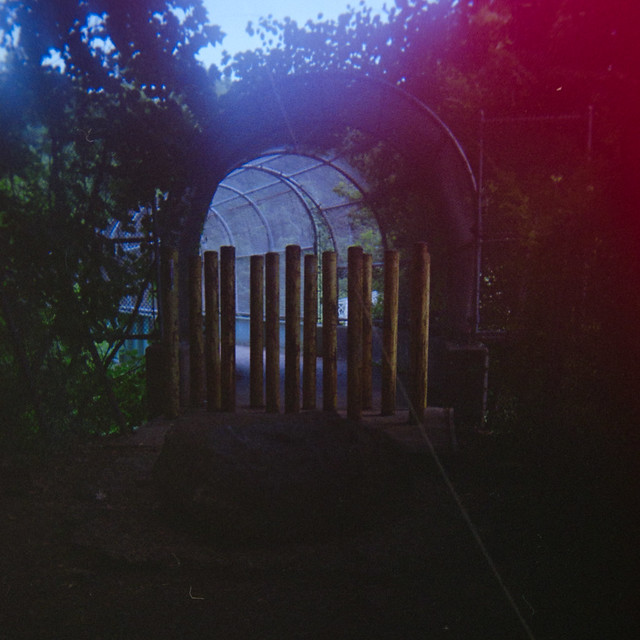 The sound of the highway became a roar as the path led up toward the footbridge.  Barricades stood like soldiers before a gate, ensuring nothing on wheels make it across.  He felt awkward as he squeezed past them, backpack held high above his head.  Many people passed as he stood in the middle of the bridge, watching vehicles zip past below.  Metal wire bit into his fingers as he gripped the fence that formed a tunnel wall of steel and sky.  That exit takes me home, he thought, imaging the walk home should he magically fall though the concrete.  The Diana camera was pulled out of his backpack.  Click!  That one would come out.

Vertical rectangular brush strokes on trees guided him along a twisting path away from the sound of traffic.  Two girls shot him sideways glances that spoke of bewildered curiosity.  He considered whether he appeared overly prepared for the journey; perhaps hiking gear was overkill for such a leisurely walk.  How far could I get with what I have on me?  Could I switch to another trail, and keep on going?  How many days would I last?  How many days before anyone noticed I’d gone?  The map on his phone showed that the blue-blazed trail was part of a larger system, spanning across many towns.  His physical shortcomings and the oppressive heat would undoubtably be his undoing in the end.  The fear of collapsing from exhaustion alone in the woods was perhaps the reason why he had assembled a hiking backpack months prior. 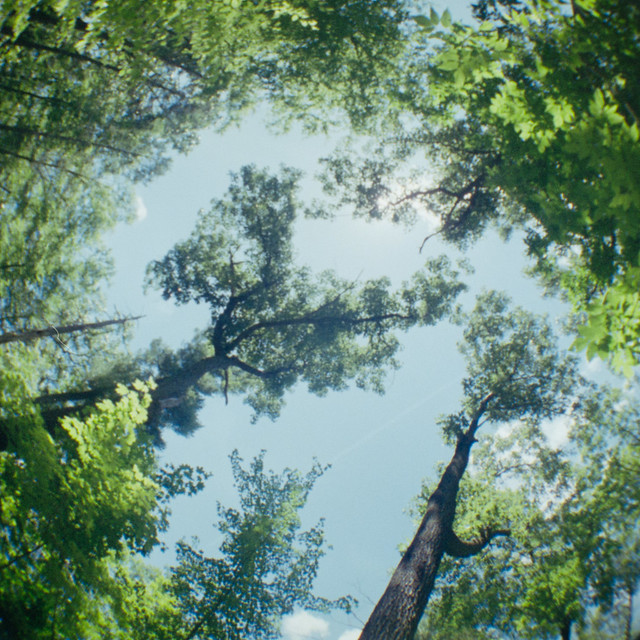 The slope of the trail biased upwards, bringing him closer to the top of the mountain.  He stopped to rest in the shade of a small valley.  The rocky walls could only have been carved by glaciers, depositing the bed of boulders upon which he sat.  He took out the dented steel bottle, and gulped conservatively.  The water was warm, but refreshing.  He listened as the narrator read a story of a mortally wounded man in Kilimanjaro, and was all too aware of the gnawing ache in his calves.  If things had gone according to plan, he would be at work right now.  He would be reading an email reprimanding him for a botched assignment, or preparing a proposal for a brilliant idea.  Years of college and piles of debt hadn’t brought him to a career ladder, but to this mountain instead.  He wondered whether the impulse to set out on this journey was spawned from boredom and melancholy, or from feelings of powerlessness and uncertainty.  Either way, it felt good to ascend something physical, and to be sure of what awaited him.

Voices met his ears as he yanked out his earbuds.  He had been closer to the summit than he anticipated.  He gripped a bent sapling, and pulled himself over a slope, and onto pavement.  His shoes felt oddly foreign on the smooth pavement.  It had taken only a few hours for him to forget what it was like to walk on the consistent, artificial workings of mankind.  It felt like cheating.  Cars full of tourists and suburban adventurers drove past him, spilling their riders into the spacious parking lot.  With eyes full of awe and wonder, they bolted toward the solitary stone tower, the stoic watcher from a time long forgotten. 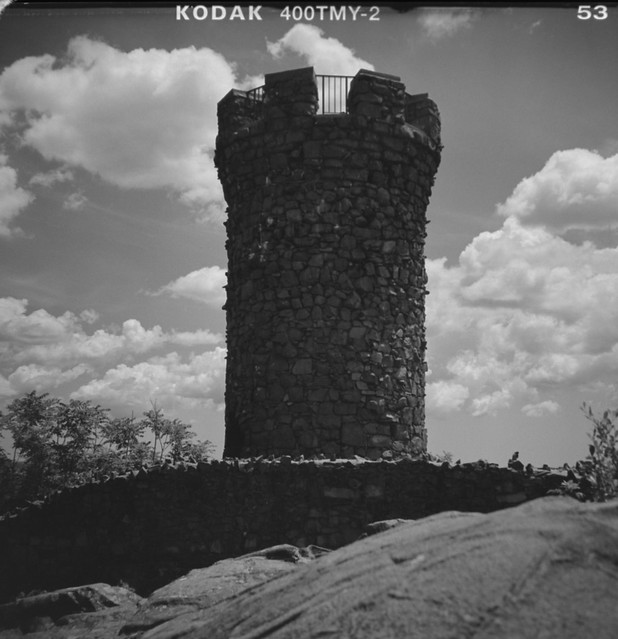 He sagged against the stone rampart, and gazed over the town below.  Thick, puffy clouds cast shadows over the green landscape like a child’s hand over an ant hill.  Feelings of tininess and insignificance came so easily when viewed from this height.  He could picture the Earth spinning though the solar system.  He visualized our tiny speck of a sun swirling through the Milky Way galaxy.  It was as if he had zoomed out of a picture too far, and then kept going ad infinitum.  When viewed this way, he saw himself as a mote of dust gliding over an inconsequential lump of coalesced star matter.  Time flowed through the universe with the power of a rapid river, and his entire species’ existence but a droplet of water; tiny, and brief.  How silly and insignificant things like money, jobs, and civilization seemed.  The universe doesn’t care what car you drive.  It will keep swirling long after your planet is forgotten.  He was back on the rampart, existing as a participating member of human society once more.  He set the Diana for a long exposure in pinhole mode, and positioned it firmly against a the uneven stone wall.  Click.  Hold.  Click.  Release.  Something to remember.

The cliff East of the tower was secluded, and he was thankful to be away from the rabble.  Reeds swayed like beach grass on a windy day.  The sun, still high in the sky, beamed down on the rocks below, baking the dew out of their crevices.  Beyond the rocks, a forested island split the languidly flowing river.  Cars sped along the highway in the distance.  From the height of the cliff, everything below seemed to move in slow motion.  He lingered at the edge, content to be momentarily free of the daily disquietude to which he’d become accustom.  Click. He rarely took pictures of himself, but he chose to capture that moment. 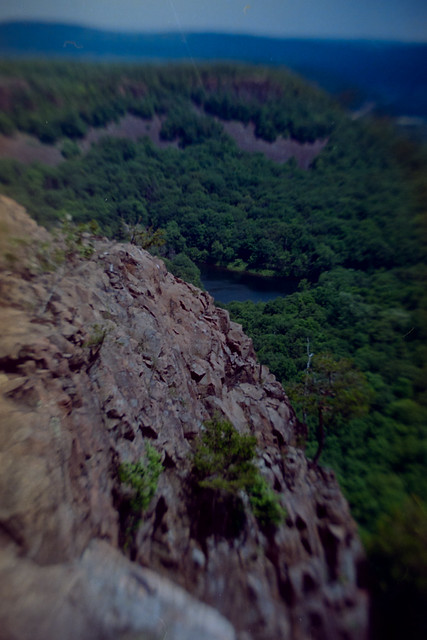 Over his right shoulder was the path back down to his car, and his boxed up home.  To his left was the blue-blazed trail, and miles of unknown.  He thought of $10 gourmet burritos, and treadmill career ladders.  He thought of unmarked paths, and oppressive treks.  His eyes never left the cliff edge as he weighted his options carefully.  He was determined to discover which way held significance, or would, at least, offer him a sense of purpose.  A strong gust of wind blew against his back causing his body to sway toward the precipice.  In his mind, he imagined what it would be like to be a bird, and dive down to skim the river’s surface.  Decision made, he turned and began to walk.